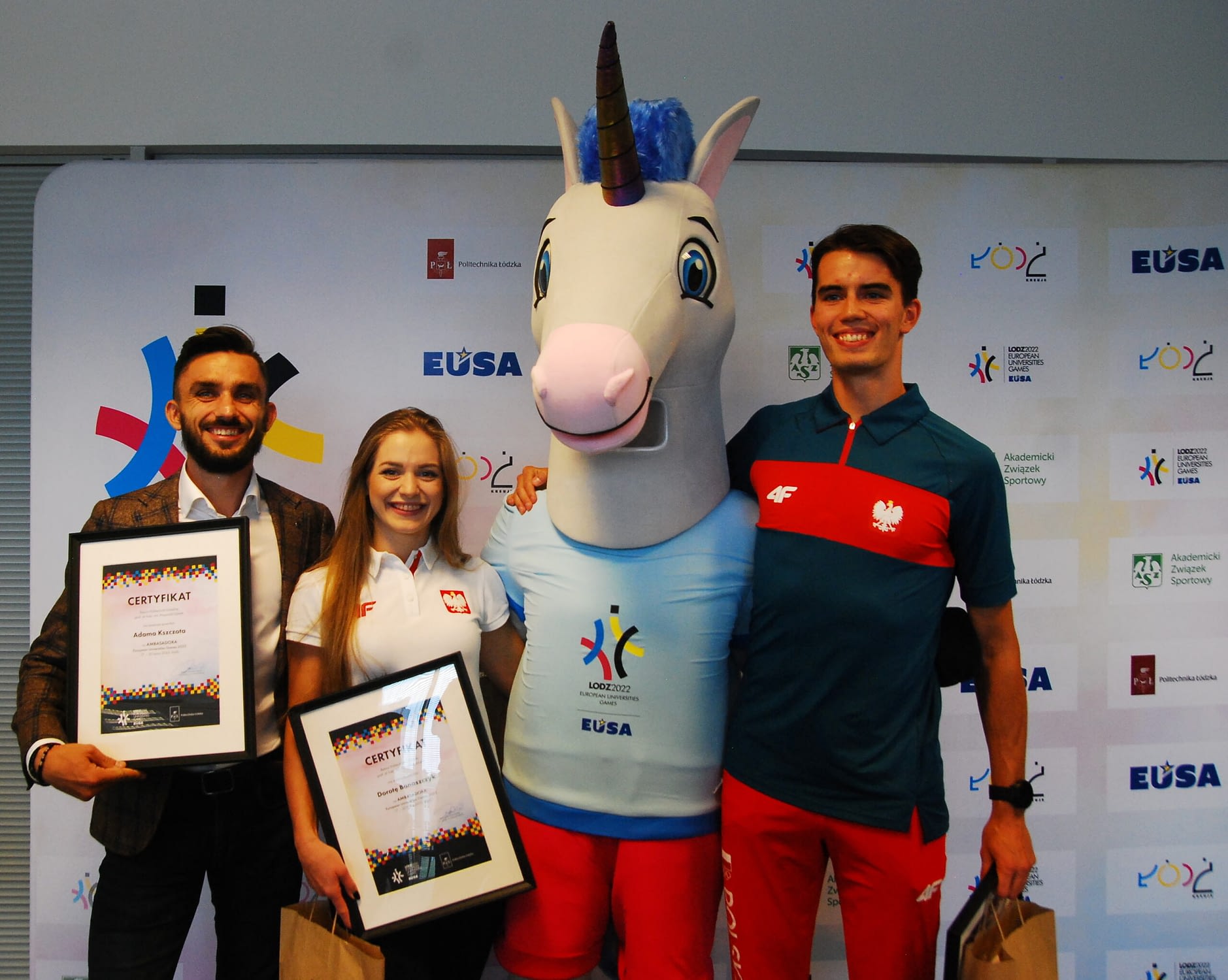 Famous and titled athletes associated with Lodz have officially become ambassadors of the European Universities Games 2022. The Olympic, European and World champions will promote Lodz, which will be the host of the largest sports academic event on the Old Continent next year.

The ambassadorial certificates were presented to the athletes during the presentation in the „Zatoka Sportu” of the Lodz University of Technology, the vice-rector of the Lodz University of Technology, prof. Witold Pawłowski. “Thank you so much that we were able to meet in a large group that is the strength of the Lodz’s academic community. Today, we introduce the ambassadors of the EUG Lodz 2022. Thank you very much for agreeing to become them” – said Prof. Witold Pawłowski.

The ambassadors of the European Universities Games Lodz 2022 are: Dorota Banaszczyk, Kajetan Duszyński and Adam Kszczot. These are athletes who are associated not only with Lodz, but also with the Lodz University of Technology – the organizer of the European Universities Games 2022. The team of ambassadors also includes PGE Skra Bełchatów and ŁKS Commercecon volleyball players.

The ŁKS Commercecon Lodz volleyball players, who won the bronze medal of the Polish championship this year, and PGE Skra Bełchatów, are real leaders on Plusliga volleyball courts. On behalf of the ŁKS team, the certificates were collected by Martyna Grajber and Krystyna Strasz – Polish national team volleyball players. PGE Skra Bełchatów was represented by: Mateusz Bieniek, Damian Schulz and Kacper Piechocki. Kamil Majchrzak, a tennis player from AZS Lodz, has also become the ambassador of the Lodz’s European Universities Games.

Ambassadors of EUG 2022, which Lodz will host in July next year, will promote academic sport, physical activity for everyone and combining science with sport. The role of the ambassadors will also be to help strengthen the brand of the Lodz universities games – the largest academic sport event in Poland since the 2001 Winter Universiade in Zakopane. They will also promote Lodz as one of the largest academic centers in Poland, a city that is friendly, open and attractive to tourists.

-“I believe that this is an exceptional role, because in addition to being associated with the Lodz University of Technology, I am also a student-athlete. I think it is an important event for us, athletes, where we can present our best sides, skills, and at the same time integrate with students from all over Europe”- emphasized Dorota Banaszczyk

Volleyball players from PGE Skra Bełchatów noticed that the EUG 2022 will be an excellent opportunity for students to compete with each other after the downtime caused by the pandemic. “We will promote this event as best as we can. We are glad that we have become ambassadors of such a large event, during which there will be as many as 20 disciplines, including volleyball”, said Mateusz Bieniek, from PGE Skra Bełchatów, a representative of the national team.

-“I am convinced that the group of our ambassadors will grow. I hope that in a few weeks we will be able to announce that Marcin Gortat has joined the EUG team ”- emphasized Dominik Leżański, coordinator of the EUG Lodz 2022.

More than 5,000 competitors from 40 European countries will come to Lodz to the European Universities Games 2022. Athletes will compete for medals in 20 disciplines. Lodz sports facilities will be the arenas of the games.